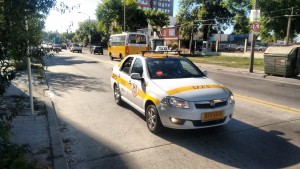 When I take a trip somewhere in the city, I often find myself going back and forth between complaining in my mind about the inconveniences of public transportation, and being so happy for the greater amount of exercise and the reduced stress of not having a car. So it would be fair to say I am ambivilent. So I will first start by sharing the positive side of this lifestyle.

Most of the errands of our daily lives can be done on foot. We walk the children to school each day. Four of the older children take lessons–either karate or ballet– just over 1/2 mile from us. We have a corner store that stocks the basics, a grocery store about 2 blocks up, a butcher shop where we buy our meat, a bakery for bread products, a pharmacy, and the weekly feria for produce, cheeses and many household basics. We  have an American-style indoor mall about a 1/2 mile away, which includes a large supermarket that will deliver. The meeting place for our church plant is just a few blocks from us. We have a neighborhood park as well for the older boys to play soccer in, and the younger children to play on the playground. Most of life happens for us in our neighborhood.

Being that I am over 40, I have had a lot of trips to the doctor, the lab and the ultrasound office during this pregnancy. Although the bus system would be workable, it is much easier to take a taxi. It costs about $100 pesos (about  $3.50 in dollars) each way to go to my doctor. I don’t have to fight traffic, nor wonder where I can park. The taxis know the location of all the major hospitals, so they don’t get lost. Taxis are usually readily available. We can almost always hail a taxi on the major road near our house within 10-20 minutes. Ray loves to get know the taxi drivers–to get their opinions of issues, or on the city, or to share the gospel with them. 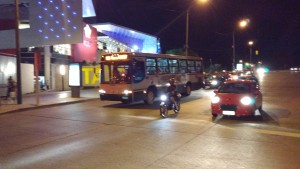 With certain excursions, a bus is much more practical. Taxis are sometimes cheaper for us, if we fill the taxi (they can take up to 4 passengers) and the trip is fairly close. But for something farther away, buses save a lot of money, at about $1 dollar per person, per bus. The beach is an example of somewhere we go by bus. The bus stop to take us there is near our house and without needing to transfer it drops us off right at the beach. That bus runs frequently and so it doesn’t actually take much longer to go by bus than it would by car. Ray usually takes a bus to go downtown. I try to avoid downtown mostly, but take the ease of a taxi when I can’t avoid the trip. Although most people on the bus are not talkative, ever so often we can get into a conversation on the bus or at the bus stop. One time I had a woman ask me for times/directions to our church, almost making me miss my stop. Other times we get to be part of the excited crowd on a bus going to a soccer game. Last month, we chose to take taxis as the bus passed us, filled to overflowing with singing passengers on their way to the stadium. I took one group of kids with me in the taxi; Ray and the older ones waited but after being passed by two more buses they were forced to hail a taxi as well. Buses provide a measure of freedom to teenagers as well, who go out without parents even without a drivers license.

So is life without a car just a bed of roses? Walking doesn’t have much of a downside, but when rain is pouring down and the kids have to get to school and the umbrellas keep turning inside out in the wind, one does miss the convenience of a car. DItto when time is short, or it is dark out and not too safe, or one is feeling sick.

As for taxis, when we go out as a whole family, we have to get two taxis. And since taxis do not have car seats, the little ones do not get optimum safety. If it takes 10 minutes to hail one, it can take an additional 10 minutes to hail a second one. But if we are going somewhere unfamiliar, it often is still more convenient than a bus. But a place that is unfamiliar to us might also be unfamiliar to the taxi driver. As someone who is bad with directions, I dread the question from the driver, usually without much warning as he enters an intersection, “Do I go right or left?” This doesn’t usually pose a problem for Ray, who is able to keep an eye on the driver, making sure he isn’t taking a longer route than necessary.

Buses most certainly have their downside. Even with a good system of public transportation, they necessarily involve needing to wait. Often one needs to take 2 buses to get somewhere, and/or walk a long way.  In addition, they don’t run as many buses on Sundays. So when we go to the other Presbyterian church in the city, it would take maybe 10-15 minutes by car. By bus we like to leave 45 minutes to an hour early to ensure we arrive on time. Likewise, if you go somewhere new, you need to research what bus to take, and then try to learn what landmarks or streets to look out for to know when to get off. And then there are times when the buses are full. A full bus may have to pass the bus stop without stopping, especially when they see the crowd of 9 that is our family.

One time a full bus did stop for us. The bus came all of the sudden right after we got to the stop, and I had the baby in my arms, and the carrier also in process of coming off the baby. We got on but there were no seats. Usually a pregnant woman or anyone with a baby gets a seat. There was no room on this bus even to get to a seat, or for anyone to notice my plight. My hands were full but I needed to stand without support with toddler in arms and the carrier dangling awkwardly. My four year old’s face was pressed into the other passengers. I had to be vigilant to make sure she had room to breath. Our oldest son never did get his foot in the bus. Yes, it is irritating when bus after bus passes us by without stopping. But I learned it is worse when an overly full bus stops and lets us in!

So here is some of the good and bad of life without a car. We actually are about to have a car to borrow for the year. Our teammates are leaving on furlough and we are borrowing it. It seats seven and we are eight right now and will be nine when the baby arrives. But we are still looking forward to it. We miss going out for a relaxing morning at the beach or site seeing as a family–things that are usually just too much work with so many in our family on public transportation. We hope to have money saved to buy our own car in 2017–auto prices here are much higher than in the US, and for a car to fit all of us, lets just say it is about 3-4 times the amount we sold our van for in the US.

2 thoughts on “Buses, Taxis and Automobiles”