The kids and I had the opportunity to be in a school parade for Belize Independence Day today! This was definitely our kids’ first time being in a parade, and for me as well, other than maybe when I was in marching band as a kid. The last two years the parade had to be cancelled for Covid, so this was an extra special time. All the kids were excited as they made decorations all week long. Our youngest went as a toucan, which is Belize’s national bird. The teachers and administration of Presbyterian Day School did a splendid job of making it both fun and educational, as the kids learned Belizean history and learned to value the importance of freedom.

Belize was formerly a possession of Great Britain. They won their independence on September 21, 1981, making them a very young country! They are still a part of the British commonwealth, meaning that the day of the Queen’s funeral will be a day off for schools and banks, to commemorate her important influence nationally.

Please pray for the great nation of Belize! Pray for a great work of the Holy Spirit, that our churches would be full of passionate worshippers of our Triune God!

This week was a special week for many families in Belize. After being mostly closed for in person learning for two and a half years, the elementary schools in Belize began again with full-time, in-person learning. Our children attend Presbyterian Day School in the village of Cristo Rey. They were able to take the bus, buy lunch in the cafeteria, play with friends, and learn in class with their teachers. School may have been a taken-for-granted reality for many generations, but it is welcomed and appreciated this school year!

Presbyterian Day School was founded over 40 years ago by MTW missionaries. Education is an important key to economic development, and even more important is the spiritual training of children to know God and His Word. PDS has been faithfully fullfilling this mission here in Northern Belize.

Since the founding of PDS, 7 more Presbyterian school have begun in Belize. There are 4 elementary schools, 2 stand-alone preschools, and a high school. One of our sons is at the high school. Please pray for all of these schools to be used greatly by God to help raise up committed and knowledgeable young people who will one day be leaders in the church and the nation!

Due to several factors the children of Faith Presbyterian Church had been meeting outside. This month we were able to designate a classroom for children’s Sunday School! Praise God that the little children have access to God’s Word and may the Lord work in their lives for His glory.

END_OF_DOCUMENT_TOKEN_TO_BE_REPLACED 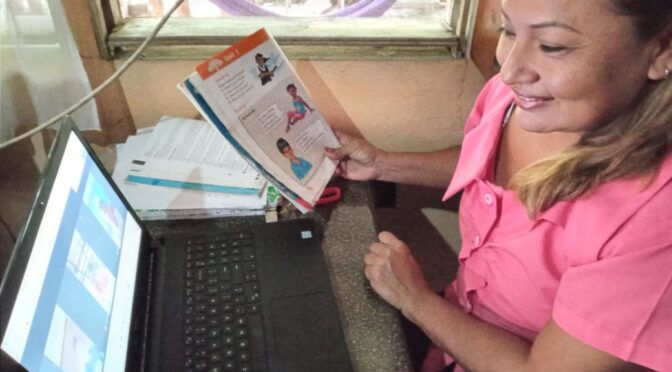 In this post, we are giving a photo collage of what online learning looks like at Presbyterian Day School, Cristo Rey, Belize. I hope you enjoy these pictures! We are looking for prayer and financial partners to be a part of the PDS team. You have heard of child sponsorship programs–well PDS is looking for a team to sponsor the teachers’ salaries. The desire is to keep the cost of education within the reach of all village families who are motivated to see their children receive an academically sound, Christ-centered education. But that means that tuition is not high enough to cover the teachers salaries. Would you consider prayer and/or giving?

Please let me know if you would like to be part of a data base to receive regular updates on the school. We would love to see individuals and even schools adopting a teacher!

END_OF_DOCUMENT_TOKEN_TO_BE_REPLACED

There has been a lot of controversy in our church circles during the past few years about the role of women in the Church. We hear it said that women’s gifts have not been valued, and that we need to usher in a new era where the church finally frees women to do valuable and worthwhile ministry. When I first started hearing the rumbling of these complaints I’ll admit I was confused, since in most the churches I have been in, women were already playing such a vital role, particularly in the hidden roles of service, helps and working with children – roles that Jesus assures us are among the most important in His kingdom.

END_OF_DOCUMENT_TOKEN_TO_BE_REPLACED

Many of us know the powerful story of Monica, a Godly woman from the third century who was grieved that her son was living a wild life of rebellion against God and part of religious sect. She prayed day and night for her son, Augustine. Only after many years were her prayers answered, and her son not only converted to Christianity, but indeed became one of the most influential fathers of the Christian church.

Mothers like Monica inspire modern mothers, as we witness the rise of secularism and the struggles of life in this evil world, and are often brought to our knees as well for the souls of our children. Christian mothers all around the world share the same hopes and fears, and indeed, we seek the face of our Savior to protect our little ones. It can be challenging, however, to remain consistent, motivated and disciplined, or even at times it can be a challenge to know what to pray!

As such, one of the highlights for me of our trip to Uruguay in July was the opportunity to pray with a small group of women for our children and their schools. These women are a part of the Uruguay chapter of the organization Moms In Prayer, an interdenominational ministry based in San Diego California, whose mission is to impact children and schools worldwide by gathering mothers to pray.

The national director of Uruguay, Lourdes, organized this prayer group with leaders of some local groups in Montevideo. We were inspired by some teaching on leading prayer, and then spent time ourselves praying together. These women are burdened with many of the same things that burden mothers in the US–children who have walked away from the faith, anti-biblical teachings on sexuality being promoted in schools and the rise of secularism. The difference in Uruguay is that the church is much smaller and Christian children often grow up feeling isolated in their faith. Lourdes is a teacher in a public high school and mentioned that she is the only Christian teacher in her school. Moms In Prayer chapters in the US are often based around a school–Christian mothers in the school band together to pray for their children and the school. In Uruguay, it would be hard indeed to find a group of Christian mothers to pray together in a school. For this reason, most Moms In Prayer groups in Uruguay are based in the church, rather than the school.

It was so encouraging for me to pray with this tiny group of mothers because I believe the only hope for the future of the church in Uruguay will come through prayer. One of the women mentioned to me that she and a friend have been fasting and praying for Uruguay. This brings me real hope and joy. Prayer is what is needed to prepare the soil for a Gospel harvest. Please pray with me that the Moms In Prayer ministry would grow and expand, that many mothers would delight to meet weekly to pray for their children and schools, both in Uruguay and all over the world.

“I want to see snow! When can we see snow?” Snow has been a hot topic of conversation in our house during the first three months of our one year Home Ministry Assignment (HMA). END_OF_DOCUMENT_TOKEN_TO_BE_REPLACED

Three weeks ago our family set foot in beautiful California. After four years in Uruguay, we have just begun our year long home ministry assignment (HMA). Praise God that we made it! We are living with Michele’s parents in Orange County, California for the first few months.

END_OF_DOCUMENT_TOKEN_TO_BE_REPLACED

What if the children in Christian families today would grow up to live lives of radical obedience to Christ? How would that change the world in which we live? What would it be like if these children had a passion to share Jesus with their friends at school? When our baby was born with health problems two years ago and I was with him in the hospital, I became reacquainted with the ministry of Moms In Prayer (formerly Moms In Touch). 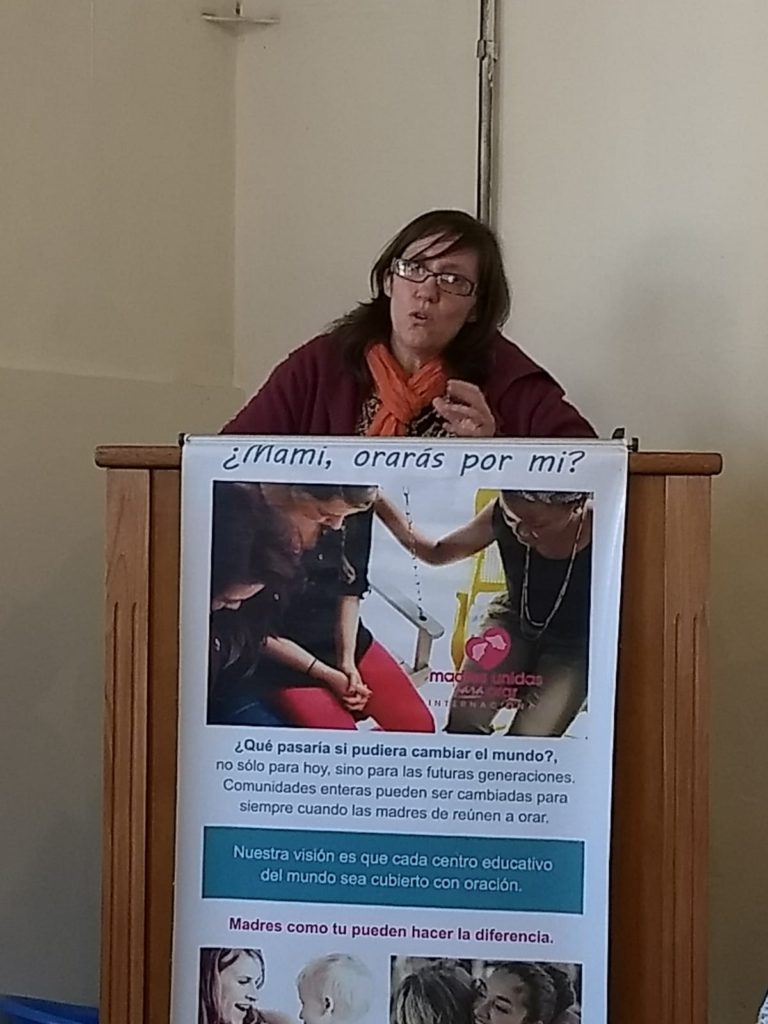 This is a ministry devoted to getting moms together for the purpose of praying for their children and their children’s schools. Many of you may be familiar with the ministry. For those who aren’t, Tim Challies does a great job describing it on his blog, here. For me, I was feeling helpless to fix our baby’s health problems, and helpless with some of the struggles my children who were at home without me were experiencing. It was a time for me to remember that we serve a loving and powerful God who cares more about our children than we do, and who is eager to answer the prayers of His people.
END_OF_DOCUMENT_TOKEN_TO_BE_REPLACED

It was early afternoon and our thirteen year old son and his classmates heard a series of gunshots (turned out to be 18 in all). Right away the administration moved all the students into an upstairs classroom, away from the street. END_OF_DOCUMENT_TOKEN_TO_BE_REPLACED