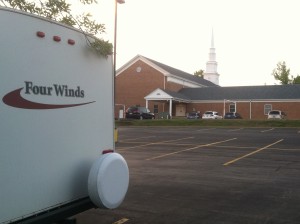 The mind of man plans his way, But the LORD directs his steps. (Proverbs 16:9 NAS)

Are you familiar with the expression, “when it rains it pours?” Or what about “Murphy’s Law?” Well, however you want to label it, we had quite an experience last week!

It had been a busy weekend of traveling and seeing a dear supporting church in Kansas. It was Monday morning, May 19 and we were looking ahead to a week that had a bit of margin (finally!) built in to it. We had five days to make it to Gatlinburg, TN, for a week long vacation in a cabin with my parents. Five whole days. I imagined getting settled into Gatlinburg a few days early with our trailer. I could do the laundry and go to the grocery store. We’d start our vacation well rested. Tuesday night we made it all the way to Knoxville. We parked in front of a Wal-mart, slept in a little, visited the Wal-Mart and the Trader Joe’s and were ready to go by noon, local time. The only kink was that poor Rebecca had been sick in the middle of the night with a nasty stomach bug. She had a fever and was depleted of nutrients. She was not looking forward to our day of travel, even though it was just under a two hour drive.

So we had been traveling a good 5 or 10 minutes when we heard a loud bang, like something in the engine broke. Then a clankety-clankety-clankety noise and loss of acceleration which told us we could consider ourselves blessed if we could get the car to the side of the rode. We were blessed indeed, as on the very busy city street there was a small parking lot with enough free spots for our very long trailer-van combination to fit, without blocking traffic. And considering we have broken down twice before on support-raising trips out in the middle of nowhere, we considered how blessed we were to be in a city that had cell phone access and is full of repair shops. And we knew from our past experiences that the Lord always cares for us.

But, it is still not fun to break down in a city where you have no connections. We tow our home behind our van, so it is a puzzle to figure out where to put our camper in this kind of situation. And then no tow truck can ever transport our nine people, so we are also left to figure out not just where we to put our home, but how to get our family there. So I would say the biggest emotion for us was vulnerability.  Ray and I prayed and talked about what to do. So I made lunch while Ray worked on phone calls…AAA, trailer parks (to be towed to), a local church for mechanic recommendations, a car rental place that would have a large enough vehicle for our family, etc. The church Ray called turned out to be a former church of some friends, who also heard about where were broken down on Facebook, and sent an email to the church for us. All part of God’s providential care for us.

It took a few hours of calling and waiting, and the tow truck drivers arrived. We were not able to secure a trailer park, so the local church graciously allowed us to be towed to their parking lot. By dinner time we were getting settled in to our new location. The mechanic could tell us the problem right away–the spark plug popped out of place because the threading broke. He thought it would take him 4 or 5 hours or so to fix, and he would try to get it done the next day.

So by bedtime that night it was my turn to come down with the stomach bug. Not fun! By morning time the worst was over, but I still had a fever and no energy. The family got to take showers at the home of a hospitable church member. I stayed home to rest. Ray’s time in the afternoon was filled with more phone calls to the mechanic, to secure an RV park just in case we got our van back, etc. We got news the van was to be ready at 5:30pm. Another kind church member brought Ray to pick up the van, and then drove him to drop the car off at the rental agency. So I oversaw a recuperating Rebecca as she made dinner, and we cleaned up and got on the road by 8pm, and we drove in to our RV park in Gatlinburg by 10:30pm or so on Thursday night. On Friday morning I was able to take my first shower since Monday morning. I was still recuperating, so it was with great difficulty that we packed all of our things, cleaned the camper and moved it to where we are storing it until after our vacation. Ironically, I had been dreading the amount of work it takes to do all of that, which was now much harder being that I was sick. But the task was accomplished, and Ray worked double time to help out. It was not the margin we had hoped for, but nothing to complain about, since we still made it on time to the cabin to spend what will likely be our last week seeing my parents for several years.

We are so thankful for how the Lord took care of us and for the kind and hospitable church at Christ Covenant Presbyterian in Knoxville. These times of feeling vulnerable and in need allow us to see God’s hand of providential care that we sometimes don’t notice when our lives are following their ordinary routines and everything feels like it is under our control. There was a strong odor of gas in our van when we picked it up. Someone suggested it was actually probably the smell of the drying glue that Ray was mistaking for gasoline. That sounded like a good explanation to our very tired selves – so we drove the hour and a half trip to Gatlinburg. It was still there  the next day. Finally, Ray called the mechanic who was very concerned and made a trip all the way out to Gatlinburg to fix it for us. When he showed Ray the mini geyser of gasoline that was gushing out (one of the new o-rings had a chip in it) there was another chance to for us to remember how the Lord looked out for us and our van and kept us safe. Indeed, it is amazing that with all that gas pouring into the spark plug chamber, we didn’t have an explosion! Truly, our lives are in His hands.

So even though at times the old expression “when it rains it pours” turns out to describe our lives, we will always look to our Lord in faith. In fact, times like these are when God wakes us up from a slumber of thinking that we are in control when in reality the Lord controls all things.

3 thoughts on “When it rains it pours”