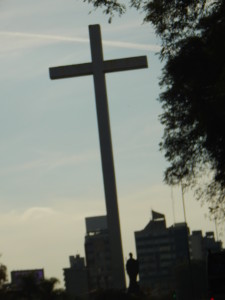 Our missionary teammates departed for furlough and left us their car to use until they return in 11 months. After having lived 13 months without a car, this gives us a chance to see what life is like for those in Uruguay who have a car. It also adds certain responsibilities like driving safely in a place where the rules seem crazy at times as well as taking care of regular maintenance like purchasing new tires. This was the task that I set out to do, not realizing at first that I would once again be in a taxi talking with the driver about the things of God.

It was a crazy morning. I had to arrive at the garage early to drop off the car, catch a taxi back home, pick up Michele, take her in a taxi to the hospital for a pregnancy checkup and then drop Michele home via taxi and take same taxi to the garage to pick up the car! Thankfully everything worked out smoothly and now we have four new tires and assurance that our baby’s heart continues to beat normally!

One unexpected encounter was with the first taxi driver, though God is sovereign and nothing is a surprise for him. As usually happens around here, people want to know why we are living as foreigners in a foreign land. I told him that I am a pastor and we are working here with the Church. This is the point where I get to share about what kind of church it is and where and when we meet (in case the driver wants to visit). After sharing that, I asked him if he went to church. His answer was not surprising, knowing that Uruguay is the most secular nation in the Americas: he does not attend church and has no interest in doing so.

I believe my taxi driver was hitting both points. He told me that just yesterday a one year old child was involved in an accident with a firearm and was killed. This is terrible, heartbreaking news. And though I don’t think my taxi driver knew this child personally, I think we can all relate to the personal sense of pain when we read or hear about these kinds of tragedies. The world we live in is full of injustice, suffering, atrocities and evil.

The driver asked how an all-powerful God can allow such things? This question not only occurs to atheists, secularists and adherents of other religions, but to faithful Christian believers as well. When I read accounts or personally experience tragedy, one of my first thoughts is “Why, O Lord?” I know that other Christians have similar thoughts and feelings.

What do we say to someone who asks this? What do we say to ourselves when we feel this way? There have been many answers by thoughtful Christians, but the one that I like to bring up has to do with the gospel message – which is what I said to this taxi driver. It goes something like this:

“That is a really good point. I’m not sure why God allows evil, but one thing I do know – that God sent his only Son into the world to suffer the just penalty for the evil things I have done. If God was willing to become a man and suffer and die so that people like me – rebellious enemies – could be reconciled to him and have eternal life and forgiveness of sins, then I know that he is good and that I can trust that he has good reasons for permitting evil.”

The advantage of this approach is that it shows God’s great love and mercy while at the same time allowing that he might have reasons for allowing evil which, for whatever reason, he does not choose to share with his creatures. It also contains important truths from the gospel message that someone needs to know in order to come to faith in Christ – a message that the Holy Spirit can and does use to draw people to faith.

Christian philosopher Scott Oliphint does something similar in a treatment of this question on a blog. He quotes from famous former atheist Antony Flew (who became a theist toward the end of his life by the way). One of Flew’s powerful motivations for not believing in God was the fact that it appears that not only does God allow evil, but that our Heavenly Father “reveals no obvious sign of concern.” Oliphint goes on to point out that God has left us a sign of his concern in the person and work of Jesus Christ:

“Has God revealed any sign of concern?  Not only has He revealed a sign of concern, He has entered into and identified, in the most excruciating way imaginable, the very problem itself –  because He has come down.” (Source).

After explaining to the taxi driver that God sent his only Son to die for sinners (which is essentially to say that God showed his concern), his only answer was, “Well, that’s what the Church says.” This short encounter didn’t allow for sufficient time to deal with all the details and sophisticated arguments on both sides, but it was an opportunity to share a little bit about God’s concern for people who in all truth do not deserve his concern. And maybe the Lord will use that to bring this man to faith in Jesus Christ, our only hope in the midst of an evil world.

4 thoughts on “God and the Problem of Evil”