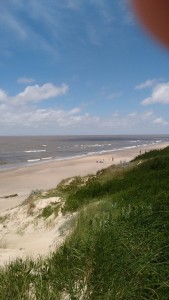 It was our last day borrowing our teammate’s car. They were about to return from their vacation, and then it would be back to taking the bus. So, we decided that we needed to have an afternoon at the beach while there was still an easy way to get there. It came at the perfect time. Our family was feeling pretty tired…but not because we had been accomplishing so much. But more because we had been learning so much. Much of living in a new culture is about the inefficiency of life and how much language and culture we learn while trying to get things done—the things don’t get done very quickly but we tell ourselves that is okay because we are learning a lot anyway. But learning is tiring. And inefficiency is tiring.

We were worn out, but the farther we got from the congestion of the city the lighter we all felt. We dropped off a package. We got gas. We bought sunblock and then went to find lunch. But at lunch I accidentally ordered one sandwich too many—something that has been known to happen in our large family, especially when ordering in another country. One of the children suggested we do like we did when that would happen in Mexico—pray that we could find someone outside the restaurant that we could give it to, someone for whom a meal would be a blessing. As missionaries who have been living on support for a decade and a half, we have so often been on the receiving end of God caring for us through other people. I try to pass that blessing along when I can. But this time, I just laughed and said there were no poor people in this part of town–just look around. When it was time to leave I brought the sandwich with me. The sandwich came wrapped up (confession—it was a Whopper from Burger King), so I grabbed it in my hand. I was hoping that maybe one of us would get hungry before it went bad, since the thought of wasting something so expensive (food prices are high here) was not a happy thought. I confess that it didn’t even cross my mind to pray that we could give it away.

Not two minutes after we left, we actually came upon a young man who looked like he would appreciate the sandwich. He looked like a teenager, and he was helping cars with pulling out into traffic. So I went to him and offered him the sandwich. He seemed happy to have it. The kids saw him give it to a young women with a baby, evidently his girlfriend or wife. It was just a very simple thing. But it reminded me of our God who is involved in our lives. I prayed that it would be a blessing to him and his family—not just physically, but that it would cause him see the God that cares for him. How often, I wonder, do I fail to take time to notice the little ways God could use me? How often am I so wrapped up in my own concerns and frustrations, that I don’t remember to seek divine appointments? How often is my faith so small that it is not even the size of a mustard seed? So many times I know I fail to take up the opportunities. But I thank the Lord for this little reminder on the way to the beach of how He cares even for the small things.